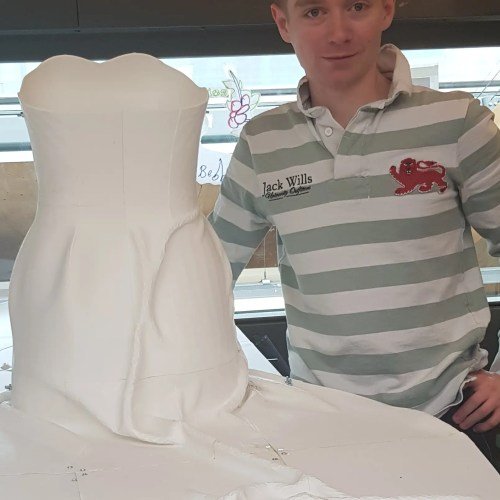 James was born in Dublin and raised in Manchester. He moved to London in 2016 to study BA fashion design at Central Saint Martins. His intention as a design student has always been to create static sculptures, which come in the form of wearable clothing.

His interest started from seeing a wealth of statues in the streets and museums, and he was incredibly drawn to frozen garments and the timelessness these ﬁgures held. As a designer, he constantly questions the importance of time and longevity of clothing and wanted to conceptualise this as an object that can last (under the right circumstances) forever.

Inspiration comes from manmade objects including the static clothing on statues, plastic toys (notably Polly Pocket), and porcelain dolls, as these objects are something that takes an incredible amount of time and skill to achieve. Whether they be sculpted by hand, or mass-produced in a factory. These techniques were not readily available to James and this is when he realised the signiﬁcance of 3D printing, which allows complex and technical processes to become easily accessible.

As he was researching ways of linking sculpture and garments, he understood that he would need to approach draping in a more experimental manner. ~Which led him to CLO, a software allowing 2D fashion patterns to be digitally sewn together without the material waste. He found a link between extracting elements from this software in order to create garments that could be held in a ﬁxed position, scaled up and then printed out. Allowing highly detailed and manipulated drapes to be created, with complete control of the ﬁnal product. James was also able to achieve things not possible by traditional sculpting processes, as all his design development was digital.

3D printing enabled James to create work which is entirely zero waste. This is something relatively unheard of in the fashion industry, but as he was printing from scratch, waste simply didn’t exist.

Whilst 3D printing was used as a gateway tool to create his work, James was interested in challenging the generic look of a ‘standard’ print. The contoured layers are something James wanted to move away from, so he developed a series of processes and ﬁnishes allowing him to completely transform the printed products into blank canvases.

After carefully sanding, priming and coating in thin layers of resin, he had the freedom to project any ﬁnish he wanted to the pieces (e.g. chromed/ ﬂocked/ hand-painted). Which meant that the process could transcend beyond regular printing and any characteristics associated with it, and broaden the uses and possibilities printing has in a design world.

James has now finished his BA and is looking forward to further his 3D printing journey as a CREATE Education Ambassador and MA students as he continues his studies at Central St Martins.