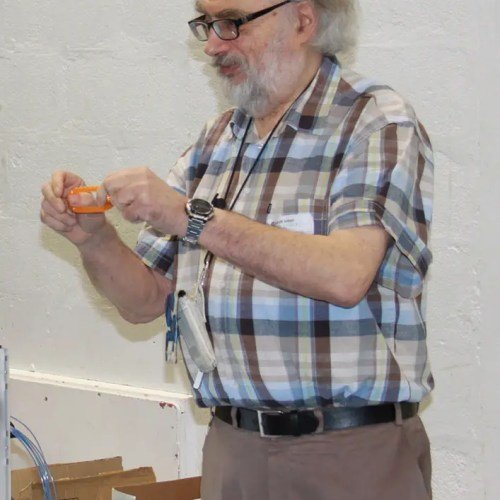 Louis Turner is delighted to have been invited to become a CREATE Ambassador.

He lives in Falmouth and, since the start of 2015, has been running a campaign to spread awareness of 3D Printing throughout Cornwall. To help in this, he has created a semi-charity (a Community Interest Company) called 3D Kernow which both supports his campaign while building up a small commercial business around printing for the the maritime, artistic centres and academic centres around Falmouth.

He works closely with bodies like the Cornwall Chamber of Commerce and the Cornwall Marine Network to take the 3D Printing message into schools and colleges. Currently, he is demonstrating in them at the rate of over once a week. His “road shows” combine powerpoint presentations, demonstrations around an active Ultimaker 2, and a substantial display of items he has printed out since last summer.

Louis has retired from a career as an international relations specialist, with a particular emphasis on Asian technology. In his career he wrote around ten books on various aspects of the international business scene. He also ran high-level bilateral conferences in Japan, Korea, China, Singapore and Russia, which all dealt with the potential for international collaboration in Science and Technology. He lived through the Personal Computer revolution (buying his first PC in 1980), and believes that 3D Printing is roughly at the position that PCs were in the early 1980s. In both cases, the technology is moving fast, is coming down to affordable price levels, but has not yet become totally routine. He believes that there is still so much ignorance about the true potential of 3D printing that it’s not enough to wait passively for people to visit their local FabLab or other centres of excellence. Instead, he believes it is necessary to go out into schools, businesses, arts centres and wider trade and community events to show lightly curious people just what can be done with machines like the Ultimaker family.