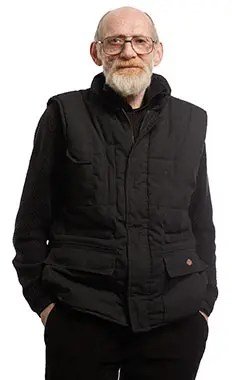 Keith Brown was born in Hexham, Northumberland, in 1947. He studied at Sunderland College of Art (1966-71) where he was awarded a 1st Class (Hons) Dip. AD. He studied as a Postgraduate student at Manchester Polytechnic (1971-2) where he gained an HDA in Fine Art Sculpture and went on to study at the Royal College of Art, London, (1972-75) where he received his MA in Sculpture.
He was a Fellow in Sculpture at Cheltenham College of Art (1975-6) and Junior Fellow in Sculpture at Cardiff College of Art (1976-77). Between 1997 and 1980 he taught as a part-time and visiting lecturer at several art schools in the UK, Europe and the USA. In 1980 he became a Senior Lecturer in Sculpture at Manchester Polytechnic; now the Manchester Metropolitan University (MMU). In 1993 he became one of MMU’s Principal Lecturers in Fine Art and Head of the School of Sculpture, Time-Based & Digital Media in the Department of Fine Arts. He was awarded a personal chair as Professor of Sculpture and Digital Technologies in the Manchester School of Art at MMU in 2007.
He has exhibited his digital art around the world and gained the reputation as a pioneer and leader in his field.

Read more about Keith at The Manchester School of Art

Some Examples of Keith’s Sculptures

Professor Keith Brown: From Virtual to Real at TCT Show